Kia ora, mates! After the first Australian leg of the Chappell-Hadlee trophy in December, where Australia dominated over New Zealand and won the 3 match series 3-0, the action shifts to New Zealand for the second leg, a match series again, beginning with the first game today in Auckland!

New Zealand will be eyeing a comeback after having been subdued in every game in December, while Australia have troubles of their own.

With David Warner rested, Steve Smith ruled out with an injury and most recently, skipper for the series Matthew Wade out with having hurt his back, (Aaron Finch has been called into the side as replacement and stand in captain) a friend of mine had recently called New Zealand’s condition here as “lucky”.

JUST IN: A new skipper, a new 'keeper and a debutant for the first #NZvAUS ODI https://t.co/gHWKHdpBN6 pic.twitter.com/otbJxZ42xj

News is in, Australia have won the toss, they’re going to bowl first!

Australia have won the toss and asked the BLACKCAPS to bat first #ChappellHadlee ^CE pic.twitter.com/Ea1jYbtOkp

The teams for today:

And there it is! The trophy is unveiled, the anthems are done, and the batsmen walk out to the middle!

Ov. 0.0: With Guptill back in the side, he’s taken his place opening with Tom Latham. Guptill will face the opening ball, Mitchell Starc takes the ball for Australia!

Starc has the new ball and we're underway!

0.1: Starc begins with a bouncer, clocking in a 139 kph. Talk about conventional. Guptill keeps it down, dot ball, and this match is underway!

There’s three runs and two singles off the first over of this match! NZ 5-0 after 1!

1.0: Josh Hazelwood is his bowling partner from the other end.

1.4: One-one-oh-one. Hazelwood bowling a bit on the fuller side.

1.5: There’s a thing about Australia-New Zealand matches. And that’s that the action doesn’t wait. Not till the last 10 overs, no.

2 overs into play, and there’s a chance already! Latham gets a thick edge on the ball, Shaun Marsh at second slip gets all due credit for trying, but it was beyond him.

Just a single though.

2.1: Bang goes Latham! Half-volley on the ball, and it goes through extra cover, fielder falling around the ball as it helps itself to the boundary. Four runs, Starc the bowler!

2.5: But Starc has the final say! Bouncer to Latham, who misreads the bounce and nicks it again, but this time, it’s straight to the ‘keeper Handscomb! New Zealand lose their first wicket!

Wicket. Latham is strangled down the leg side by Starc and departs for seven. BLACKCAPS 15-1 #chappellhadlee #NZvAUS ^CE

OUT! Latham gloves a lifter from Starc and Handscomb accepts his first catch behind the pegs!

Blackcaps skipper Kane Williamson is the next batsman to walk out to the middle!

Perfect start for Australia, early wickets can slow down any batting, even if just for a while.

Ov 4: Hazelwood with the ball, and he’s bowling full. Australia looking to capitalise on the first wicket’s fall, looking for an lbw here.

3.5: Four runs! A little width, Guptill comes down the track, and bangs it away!

For anyone with a dream of diving int’l advertising boards, Eden Park’s the place.

3.6: Looking for the lbw all over, Australia appeal! It’s close, above the pad, but Australia are really getting warmed up here.

CRACK! Guptill smashes one through the covers for his first boundary. BLACKCAPS 24-1 #chappellhadlee #NZvAUS ^DR

Over 5: Guptill cuts lose this over. 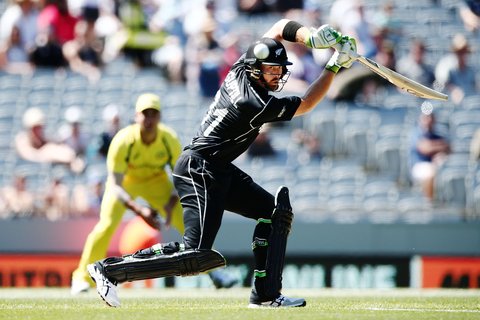 Guptill hits Starc for three boundaries off the fifth over. He's 23 from 17. BLACKCAPS 36-1 #chapleehadlee #NZvAUS ^DR

Another boundary for Guptill, taking the BLACKCAPS through to 41-1. The fans are loving it! #chappellhadlee #NZvAUS ^DR pic.twitter.com/kvDX9q12AY

Ov 6: Pat Cummins comes in to the attack. Ah, that was not intended.

5 runs off the next over, with a boundary to Guptill, hitting a faster 147-gunner from Cummins! NZ 41-1!

Ov 9: 5 runs off it and a lovely boundary to Kane Williamson.

8.4:  Williamson pulls a shorter one away to the ropes! -uh, advertising boards.

Brings up the Kiwi fifty!

Ov 10: Pace and bounce, Cummins with the ball!

9.3: Fuller, Guptill pushes it for 2 runs through square leg.

9.4: whawazat. A 144 kph bouncer, zings past Guptill who tries to hit it up, then misses the wicketkeeper behind him too. 5 wides!

Guptill slams Cummins through mid-wicket for four off the final over of the powerplay. NZ 1-62 (10)

10.1: A single off his first delivery this match, a slightly pitched up delivery outside off, Williamson drags it across to the other side and runs it. That’s the fifty run partnership between Guptill and Williamson!

The 50 run partnership is up between Guptill and Williamson. BLACKCAPS 63-1 #NZvAUS ^CE

10.4: Four runs to the skip, over the third man boundary.

Another Williamson boundary takes the BLACKCAPS to 69-1 after 11 overs. #ChappellHadlee #NZvAUS ^DR

Someday, maybe I’ll be sitting in the grounds with wires jacked up all around me, and while everyone around will be watching the batting, trying to catch the odd six in the crowd and drinking their drinks, I’ll be worrying about laptop battery and the glare on my screen and really be live blogging. Aah, blissful dreams. Perhaps the only things getting my up at 3:30 am!

Over 12: Cummins with the ball.

11.3: What do you do when the bouncer’s over your head? Stick your bat up through it, and send it over the ‘keeper’s head, and into the boards, like Guptill! Four runs!

Lovely glance from Guptill helps the BLACKCAPS to 75-1 from 12 overs. #ChappellHadlee #NZvAUS ^DR

Over 13: Faukner with the ball.

12.6: Short ball to outside offstump, Williamson finishes the over with a single, it’s 8 runs off the over,

Ov 14: Marcus Stoining into the attack.

13.3: A wait until late again, Guptill plays and steals by a quick single.

It seems to be a boundary an over at the moment. Guptill and Williamson going along nicely! #ChappellHadlee #NZvAUS ^DR

13.6: Last ball does it. Stoinis to Williamson, the ball angles in and hits his pad, and a catch is taken. Australia appeal, and the umpire’s finger goes up! It’s a big wicket for Australia here! New Zealand lose their skipper, it’s 87-2!

Meanwhile, Guptill moves on to 48, no pressure. Eden Park’s got an encouraging crowd today!

And Ross Taylor walks in with a willow and a will not to give away his wicket, (and not run anyone out), wow, how’s that for an alliteration?

Wicket. Williamson gets an inside edge onto his pads and gets caught in the gully. BLACKCAPS 87-2 #ChappellHadlee #NZvAUS ^DR

Credits? All given. ESPN, for every fan in every part of the planet where streams are “not available in your geographical location”s (and you never get the live telecast anyways) and WordPress for helping me sort a jumble of data!

Ov 15: Mitchell Starc returns, the timing perfect. With an energetic crowd, a new batsman, and another 2 runs away from his half-century, Australia smell blood, and an opportunity to knock off the batting attack.

I wonder how the audience is taking that!

The wicket of the Kiwi skipper was Marcus Stoinis’ first in international cricket! That’s some wicket to begin with!

15.1: There comes the single! It’s a half century to Guptill, he’s been batting with a fierce purpose out in the middle! 8 fours in his innings so far!

15.2: 5 wides again. In similar fashion to the last one. the ball sails over Taylor’s head and the keeper’s. Taylor lets it go, Handscomb ends up having to.

Even Marcus Stoinis looked a little surprised at his bouncer going for five wides! #NZvAUS pic.twitter.com/od6cNYBlMS

15.4: Timing and placement from Taylor. He plays it on the on, picks his spot in the square-leg gap and takes two.

Comms got down to the players not-yet on the field:

Tom Blundell: The boys have been fantastic. I have been enjoying my time. There’s bigger crowd in international cricket. Great day in Auckland. I think anything close to 300 is fantastic.

Ov 17: 5 runs with a boundary to Taylor. Starc the bowler.

16.6: Full delivery, Taylor opens his bat face and drives on to the boards! 100 up for New Zealand!

Great timing from Taylor as he pushes one through the covers for his first boundary! #ChappellHadlee #NZvAUS ^DR

Ov 19: Travis Head’s been brought on to bowl.

A run and then a wide. Runs flowing.

18.3: 4 byes follow. To be the harshest on Handscomb, that’s now 14 runs gone behind him, of course, not all entirely his fault, but for the sake if stats! That’s fourteen extras just behind the wicketkeeper!

This site uses Akismet to reduce spam. Learn how your comment data is processed.

Sensations In The Dark (at the Guardian)

Here’s a clip for you today if you miss there being people visible behind the music you listen to. It’s a performance of the song Sensations In The Dark by Gruff Rhys, formerly (?) frontman, singer and guitarist in Welsh psychedelic pop five-piece Super Furry Animals. (The band’s currently on hiatus as members pursue their […]

Some New Punk For You

As you may know, my constant blathering on about music at impossible hours of the day and for impossible lengths of time has landed me in the only logical place I could end up in: the local radio station doing a music show. Then there was a second music show because I listened to too […]

Don’t read it, it’s a rant. If you want to read a rant, it has some cool stuff about paper phones as a perk.

A little something I wrote this week for the radio show I do’s blog… Earlier today, I was talking to someone about music (as I am wont to do, seeing as how my inability to shut up about it has landed me a not-temporary spot on a music radio show), and the conversation invariably turned […]

It’s officially holiday season! And for an expat like me (is that what I can myself?), it’s officially Schrödinger time. (It’s holiday season, but it’s also not.) It’s Diwali this week, which means for the first time since lockdown began, we’ve had to clean the house out, and by “we”, I mean “not me”, because […]